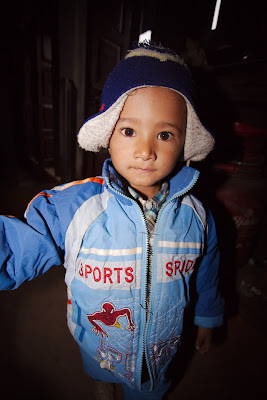 
Mark and Elaine were up first and when the kid saw them he went searching through the rooms looking for me.


We were having breakfast early as we decided to walk back to Khandbari rather than take a jeep as was in original plan.

I didn't sleep much as there was a tractor with a large and loud stereo system working at 3.30 am. 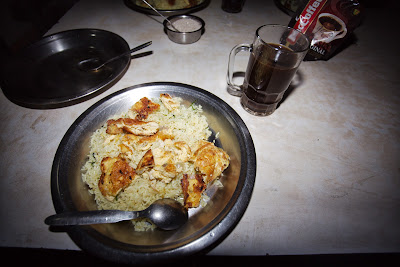 For breakfast we had fried rice and omelets.

We also had coffee for the first time in weeks.

The kid went and asked his father in Nepalese if I was leaving. He then came to say goodbye without being prompted. 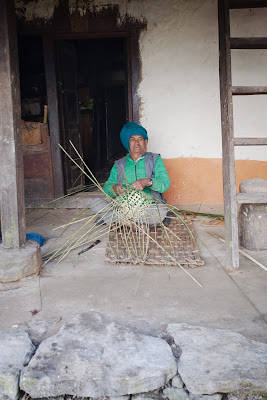 As we were leaving Num we saw this guy making baskets from bamboo. 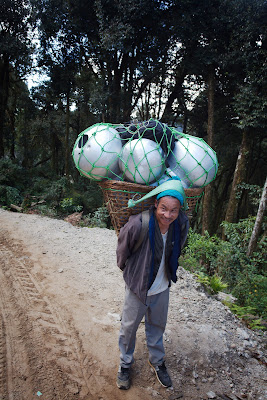 It was a Saturday morning which is market day in Khandbari.

We soon started meeting folks coming back from the market.

This guy was laughing at the fact we recognised the raksi still he had bought at market. 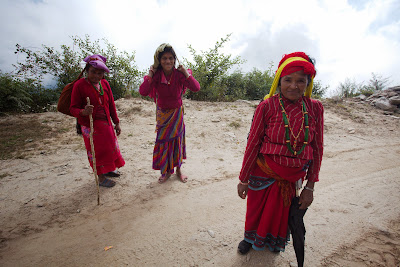 We met more people on the road than we had any other day.

It seems many people make the long trek to Khandbari on market day. 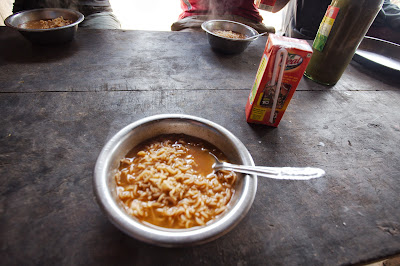 Between Num and Chichila we were mainly walking on the road.

On the steeper terrain further up the mountains our guides were quick and nimble but on the better roads they could not match our pace.

We stopped and waited for them at Chichila and then had noodles for lunch. 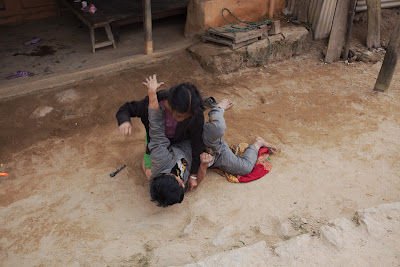 This couple in Chichila were demonstrating why you shouldn't drink  raksi in the afternoon.

They were really going at it - and she certainly was getting the upper hand.. 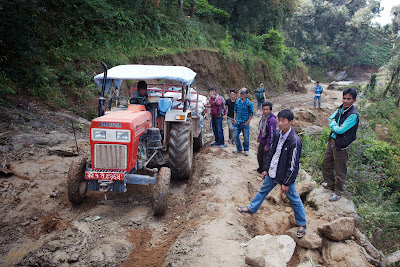 As we carried on towards Num we came across this tractor stuck in the mud.

It was blocking a couple of jeeps heading downhill so all the passengers were out to help push the tractor. 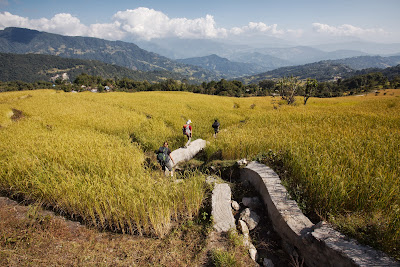 After lunch strongman really made an effort to stay with us.

We cut through paddy fields and walked on the old trail rather than down the boring road. 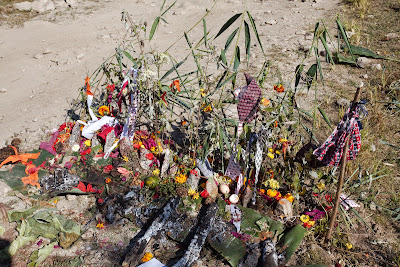 We came across a number of roadside shrines / offerings.

I think it is related to the Dashain festival. 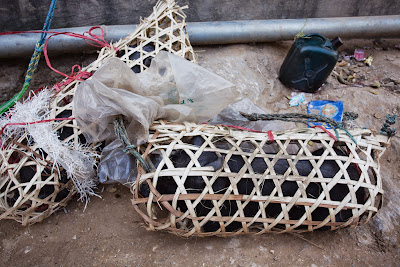 We met a number of people carrying pigs in bamboo bags.

Seems this is the way they package them at the market.

We pushed on as we wanted to see the market in Khandbari.

It took us about 6 1/2 hours to walk from Num to Khandbari. 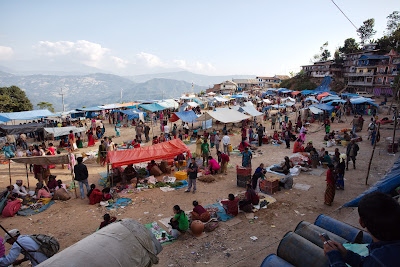 As soon as we got to Khandbari we dropped our bags at Tejanath's house and went to see the market.

It was late in the afternoon so the animal market was finished but there were still many people selling vegetables and herbs. 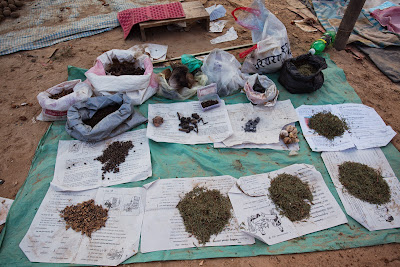 There was a very interesting mix of herbs that are gathered growing wild in the forests and mountains.

I though the animal head sitting amongst the herbs at this stall was a little funny. 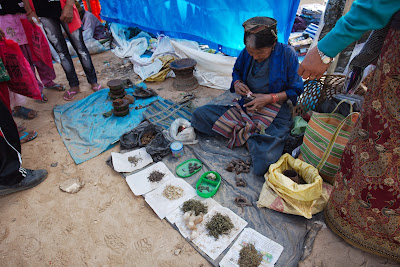 Many of the people selling herbs at the market looked like they didn't have much money.

The herbs were wrapped in pages ripped from school books. 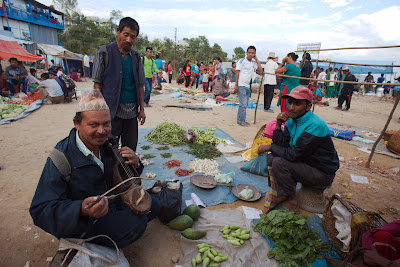 It was interesting walking around and seeing the different offerings at the market.

There were also people playing instruments.

It was great being the only tourists in a place like this and getting some insight into the lives of the locals. 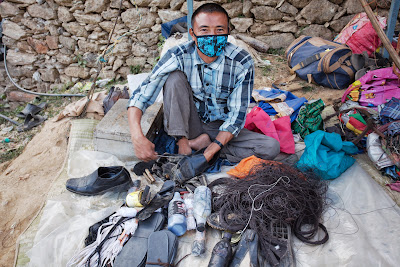 As well as fruit, veg and spices there were people selling woven goods and cobblers fixing shoes. 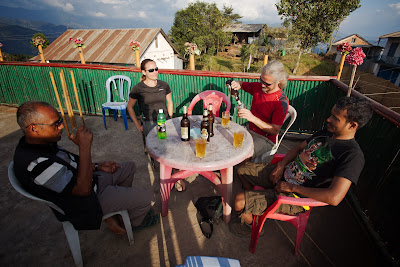 After the market we found a rooftop restaurant where we could have a beer and tell Tejanath how the trip had gone.

It was great to find a place with a fridge so the beer was truly cold. 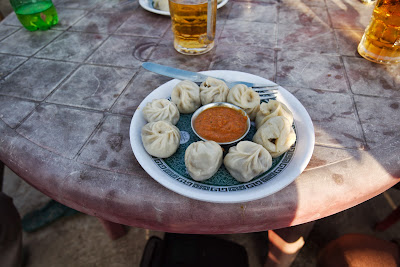 We also ordered some Momos as a snack.

They were nice but could have done with a lot more spice in the dipping sauce. 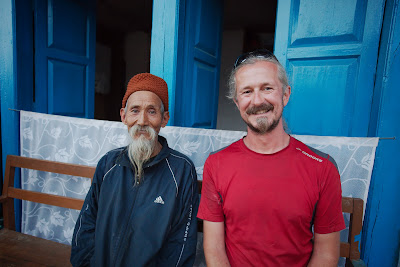 On the way back to Tejanath's I spotted this guy who looks like an older version of Mark. 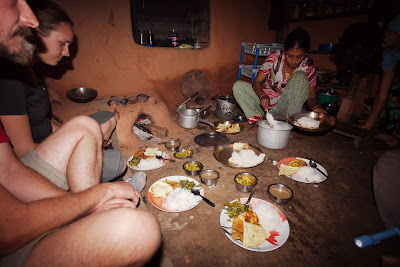 That evening Tulasa cooked us a tasty Dal Bhat.

We were always extremely well looked after when staying at Tejanath's.

Tulasa would go out of her way to vary the dishes she served with dinner. 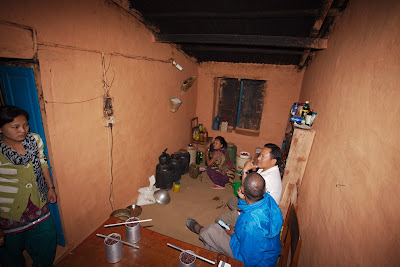 After dinner we asked Tejanath whether we could find tongba in the town.

He brought us to one of his neighbours who had been in bed as the power was off.

They got up and gave us tongba and pickled cumin.

They were friend of Tejanath from the village where he was raised. 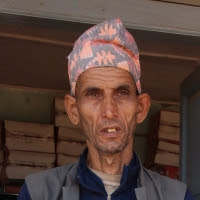 Weather: One hat day.  The walk from Num was hot and long but as it was downhill most of the way it was quite an easy day. Khandbari is a little over 3,000 ft and was warm into the evening.

Accommodation: Staying at Tejanath's was great and Tulasa really looked after us well.

Posted by Mick Fingleton at 1:00 AM