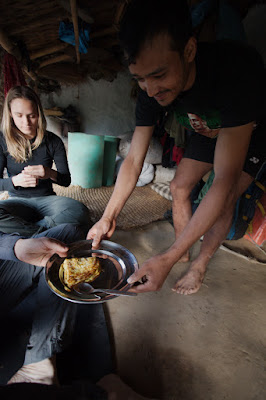 Strongman served us omelets for our first breakfast (2nd breakfasts was beginning to become a regular occurrence..)

We knew it would be a short day of walking so we weren't too concerned about getting moving too early. 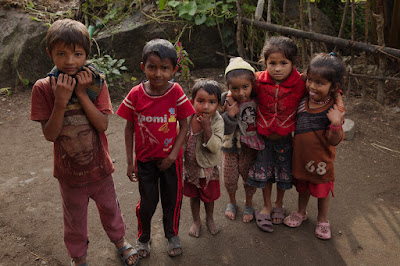 The local kids came by.


They were always curious to see what we were doing and what we had with us. 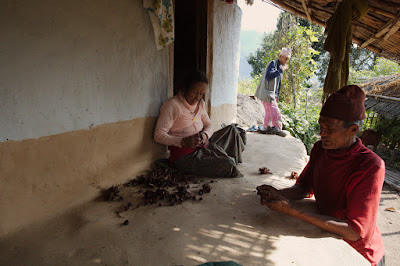 Strongman's parents were busy pottering about the house and garden.

His mother went out for goat food and returned buried under a pile of leaves and also had her apron full of cardamom.

Here they were separating cardamom that she had foraged. 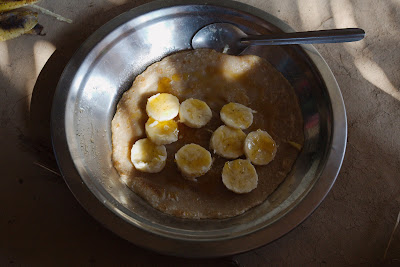 For second breakfast we had pancakes with bananas and honey

I think strongman realized how much we had liked these the previous day. 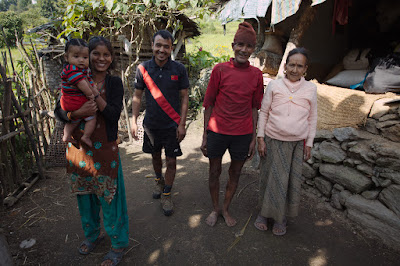 We said goodbye to strongman's family and got ready to leave.

Strongman was insisting on no payment as we were guests in his house.

I left his wife with 2,500 NPR - it seemed appropriate to pay something similar to what we had in the teahouse. 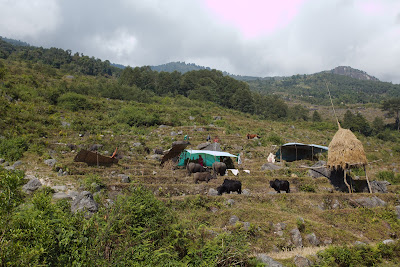 The walk to Tashigaon was not too long or difficult.

We were mostly contouring along the hillside but did climb almost 2,000ft over the day. 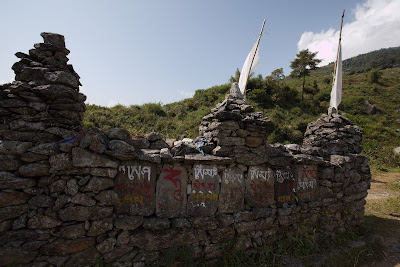 At every high point along the walk there would be prayer flags and Mani stones.

They were always nice to see as you know you'd have a flat or downhill stretch after. 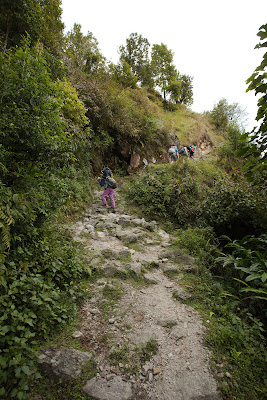 There were some uphill sections along the walk but nothing too strenuous.


The entire walk was only about 4 hours. 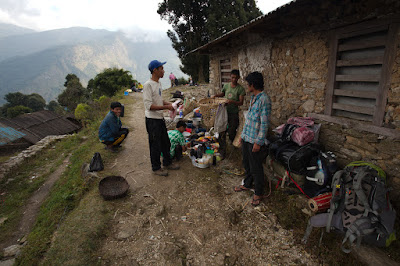 We stopped for a break at a small village where the German's were eating lunch.

It looked like a major production preparing lunch in the bubble. 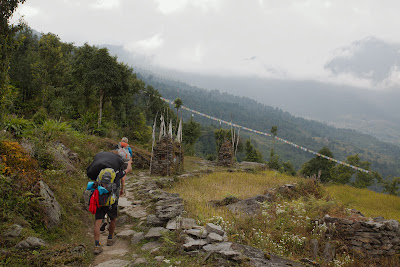 We could see Tashigaon in the distance. 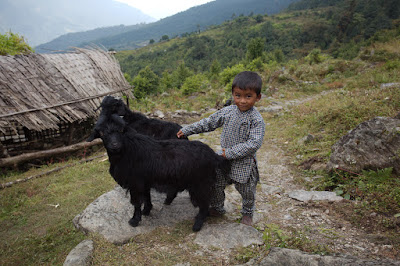 Many times we would hear kids shouting Namaste from places unseen off the trail. Occasionally we would meet them on the trail. 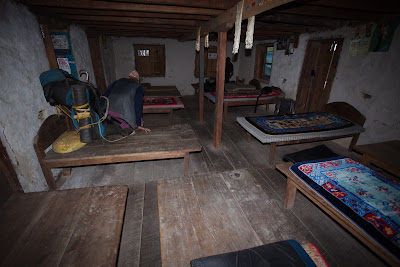 When we arrived in Tashigaon Strongman and Longman got into a debate about where we should stay.

Tashigaon is very different to the previous villages.

It is all run by Sherpa folk and there are a number of nice teahouses. They also have camping areas and a helipad for evacuations.

We went with the teahouse Longman chose since we had overruled him in Num. 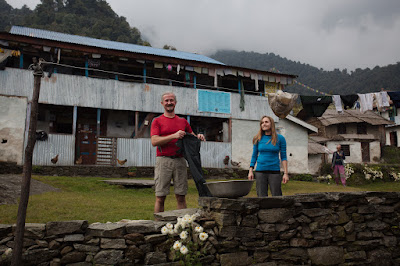 The teahouse was more like a hostel than anywhere else we had been.

It had a nice shower, big dorm room and private bedrooms at the end of the building.

I stayed in the dorm with the guides and Mark and Elaine took one of the private rooms.

Since it was the last day before we hit colder altitudes we took the opportunity to was ourselves and do some laundry. 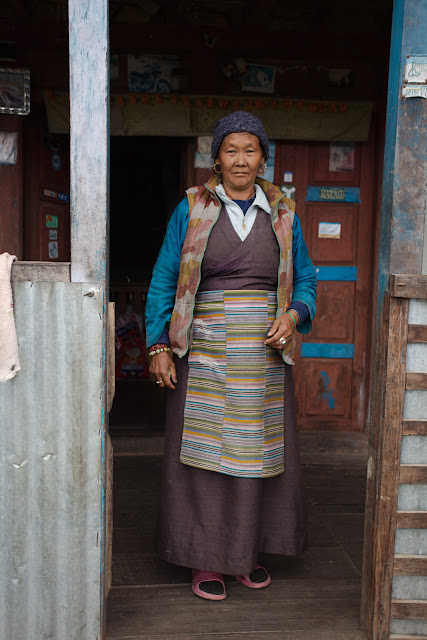 The lady who ran the teahouse was really interesting.


She has 4 sons who have been to the top of Everest. 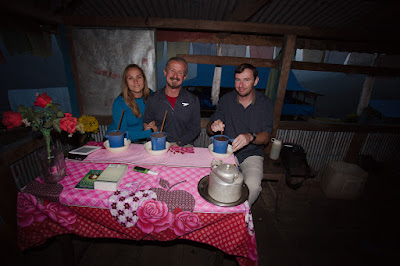 We inquired and discovered Tongba was available at the teahouse.

Since it was chilly in the evening we decided some warm drinks were in order. 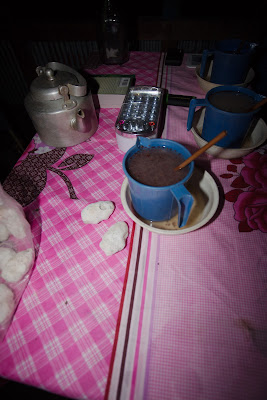 We asked about how the Tongba is made.


Basically they dry millet in the sun, sprinkle yeast on it and then leave it ferment in a bucket for a couple of weeks.


The white rock in the picture is murcha. This is yeast mixed with rice powder and is what is used in the brewing process. 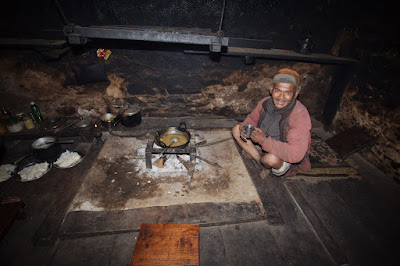 The kitchen in  the teahouse was a simple affair like everywhere else we'd been.

There was an open fire in the middle of the floor and no chimney.

Finally the vegetable of the evening would be cooked and then all served. 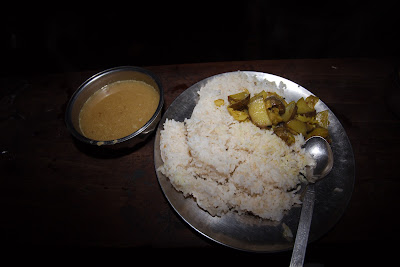 This was the Dal Bhat we ate that evening - simple but tasty. 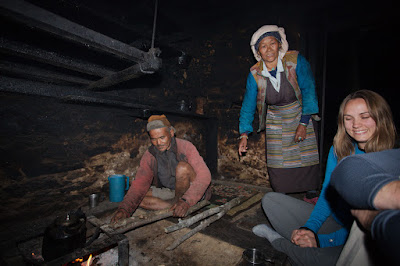 After dinner we sat around the fire and drank tea with our Sherpa hosts. 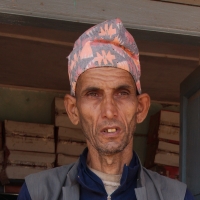 Weather: Although Tashigaon is at almost 7,000 ft it was still mild and sunny in the afternoon. The evening was a little chilly but I would say still one hat weather.

Accommodation: Definitely a 3 cup rating for the teahouse in Tashigaon.
The dorm was clean and comfortable. There was a shower with a proper shower head. Our hosts were great.
Posted by Mick Fingleton at 3:00 PM