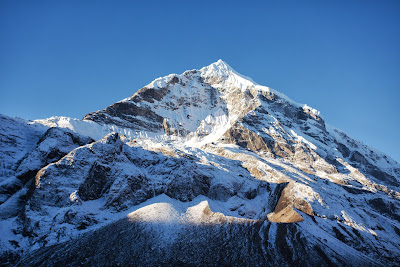 We got up at 6.30 to a beautiful day at Langmale Kharka.

The surrounding mountains looked amazing in the early morning light. 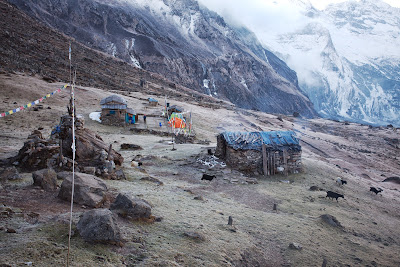 The far building in this picture is the teahouse with the German's tents out front.

The near building is the hut where the teahouse owner and his wife live.

Our guides slept in that hut with the owners. 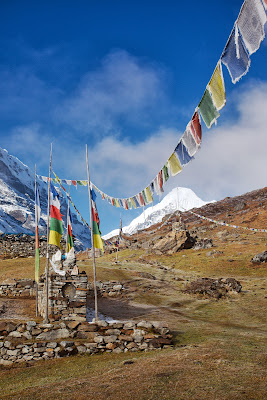 The air was crisp in the morning.

It was so cold all the prayer flags were frozen.

The Germans headed off for a day hike to base camp while we packed and ate breakfast.

They left Langmale Kharka a good 1 1/2 hours ahead of us. 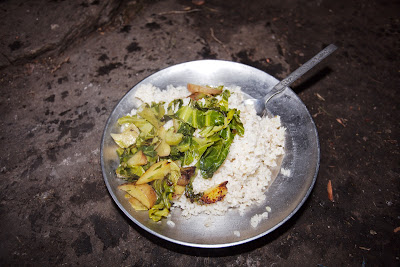 For breakfast we had Dal Bhat. It was served with potato and yak leaves. 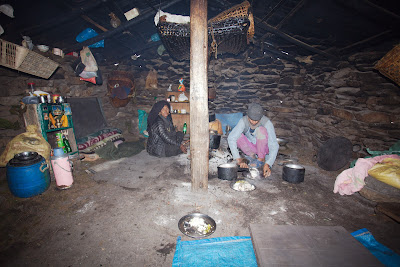 Breakfast was cooked and served in the hut where the teahouse owner and his wife lived.

It was amazing just how little material belongings they had.

It must be a tough life living in these conditions at 15,000 ft. 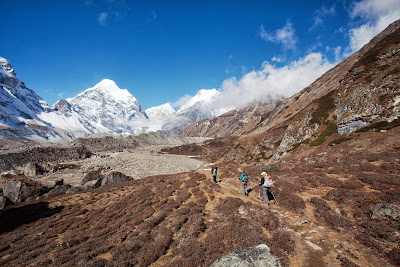 After breakfast we hit the trail heading for base camp. 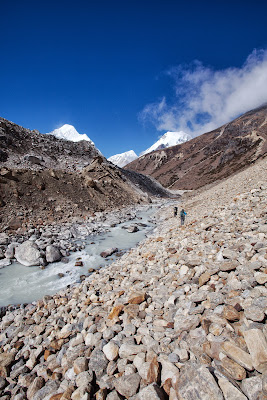 The first part of the trail followed a nice river full of glacial flour.

In some places there was a nice trail but in others you just had to fight your way across ankle breaking rock slopes. 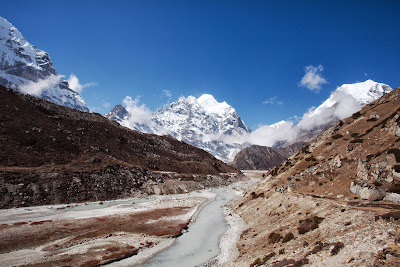 This valley is often referred to as the Yosemite of Nepal - truth was Yosemite pales in comparison. 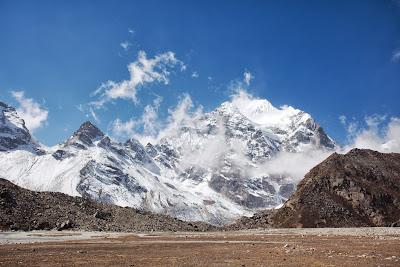 At the top of the valley we hit a large open area surrounded by impressive peaks.

It really was a cathedral of mountains.

My face had a silly big grin for the entire day. 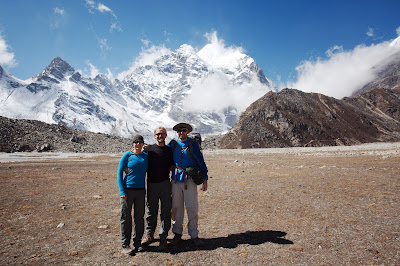 We must have spent close to an hour taking pictures and admiring the mountains. 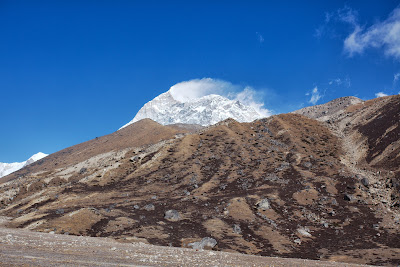 This is the view of Makalu from that large open area.


It looked like some serious winds at the summit. 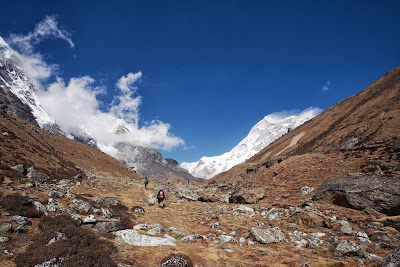 We carried on towards Makalu.

After a short while we caught up with the German group - they complained how we were younger and fitter - at least it sounded like complaints which didn't make sense in such a place.

I can only assume they had trouble with altitude as they never made it down to base camp - some of them didn't see it at all. 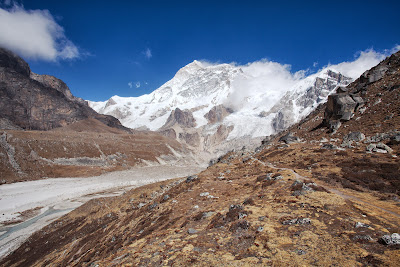 This was the first sighting of Makalu Base Camp.

It's hard to see in the small picture but there is a small group of buildings almost exactly in the center of the picture. 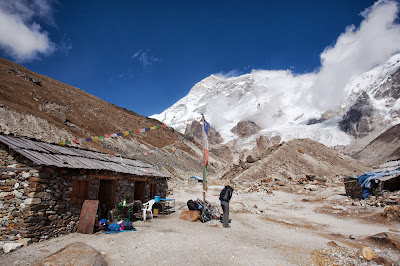 When we got to base camp both guides made a beeline for this one teahouse (there were 2 to choose from).

There were only three beds - two in the common room and one in the kitchen.

I would have been taking the bed in the kitchen and moving the lady who ran it to the floor somewhere. 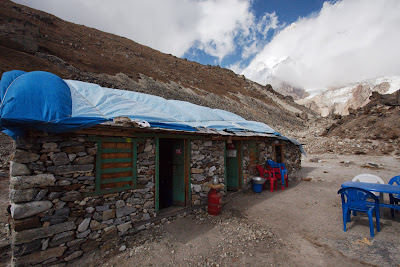 We left our guides and went exploring the other options.

We picked the teahouse closest to the mountain.

Both guides warned that it would be too expensive - we guessed they would be charged here but could have free accommodation in the first teahouse. 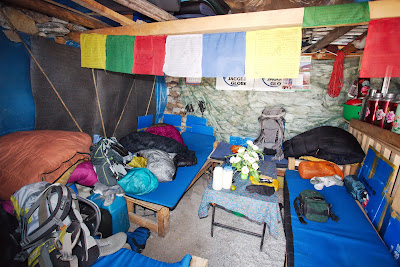 There are times when you need to take control of your holiday.

You need to remember that you have paid for food and accommodation for the guides and pick the options that suit you rather than them.

This is the sleeping / dining room in the teahouse we chose. 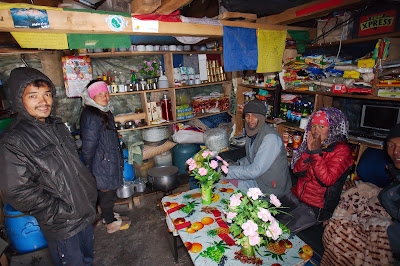 This is the kitchen area in our teahouse.

There were two Sherpa girls and one guy hanging at the teahouse.

Turns out the guy was cook for expeditions on the mountain and spent his time at camp one while climbers were on the hill.

I guess he just hung around base camp between expeditions. 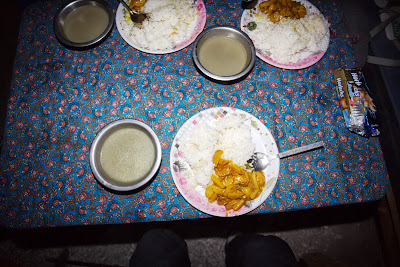 Dinner at base camp was Dal Bhat served with curried potatoes.


The potatoes were yummy. 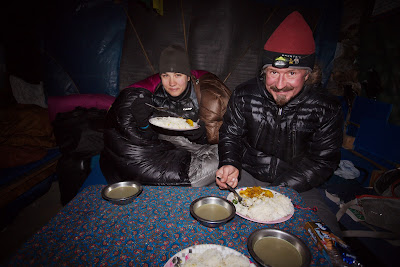 We ate dinner around 4pm


It was really freezing at base camp and we were happy to eat as early as possible so we could climb into warm sleeping bags for the night. 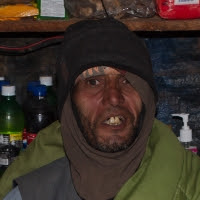 Weather: It was absolutely freezing at base camp - 3 hats for sure.
I didn't bring enough clothing and was cold the entire time there. My down jacket was loose fitting and I only brought a single mid-weight fleece. If I return I will bring much more appropriate clothing.

Accommodation: I would have to give the teahouse a 3 out of 3. There was no toilet at base camp but the teahouse itself was very cosy. They had lined the walls with tarps to keep the breeze out.
Posted by Mick Fingleton at 9:00 AM