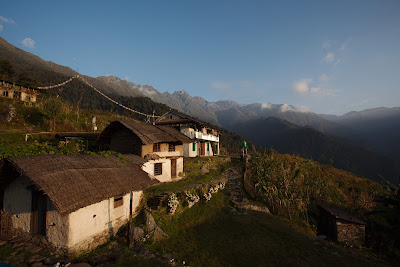 We were up early in Tashigaon as we knew we had a big day of walking ahead.

The destination for the day would be Khongma, situated on the ridge of the hills we could see behind the teahouses next door. 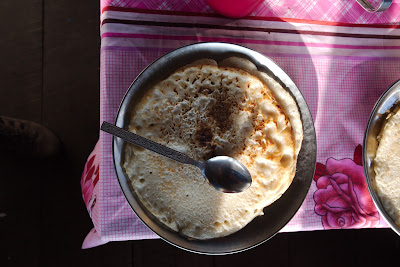 For breakfast we chose to have pancakes. We were thinking of the nice breakfast in Seduwa with honey and banana. What we received were doughy and boring - bad choice.

The bill for our night in Tashigaon including Tongba, dinner, breakfast and lodging was 2,100 NPR (less than $20) for the three of us. 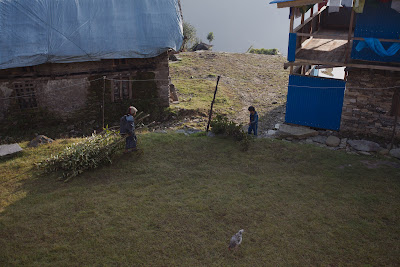 Although we were up early the local kids were up even earlier.

These kids were out collecting goat food at around 7am. 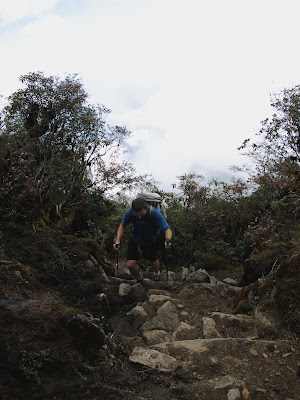 The trail from Tashigaon is steep and long.

In some parts of the climb there were nice steps. In other places you had to scramble up tree roots.

After this day it was always on my mind how tough the decent would be on the return journey. 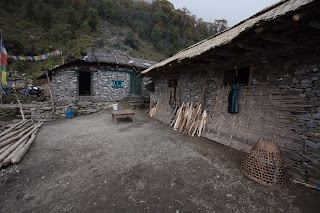 We stopped at this small house to have a cup of tea and take a break.

I don't think they offered accommodation but it certainly seemed like a regular rest spot for trekkers to rest. 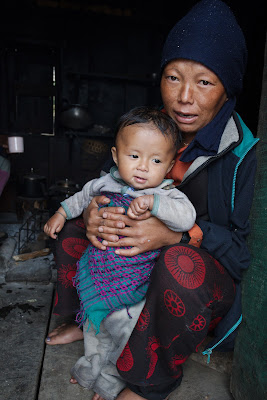 This lady and her child lived in the house.

They had a pot of mutton broth on the fire when we arrived (the child's food) and Mark managed to snag a bowl.

Strongman was carrying biscuits so we just bough 3 cups of tea for lunch.

The price was 250 NPR - a bit expensive in hindsight but I'm guessing 100 was added for the bowl of broth. 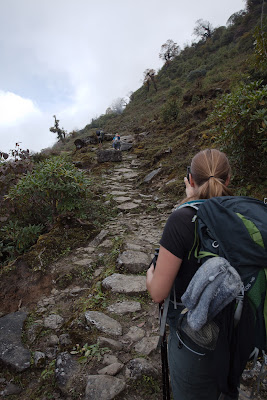 After lunch the rail continued to climb upwards. 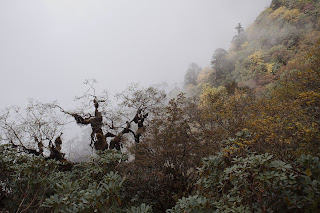 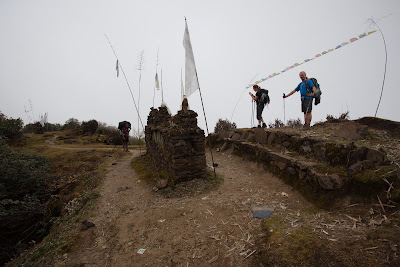 We eventually came across these Mani stones and prayer flags.

You come across prayer flags at most every high point along the trail and fortunately these were marking the ridge and that climbing for the day was done.

We did the walk from Tashigaon to Khongma in about 4 hours instead of the 7 we had expected. 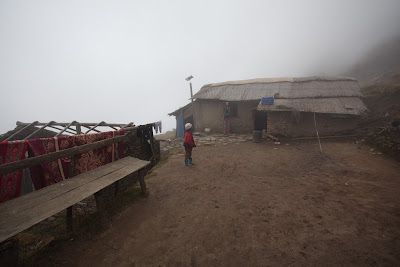 Longman had raced ahead.

When we arrived in Khongma he had arranged we stay at this house and had ordered tea.

Strongman was pretty upset and claimed there was another, nicer teahouse just up the hill.

We learned an important lesson on dealing with our guides on this day. 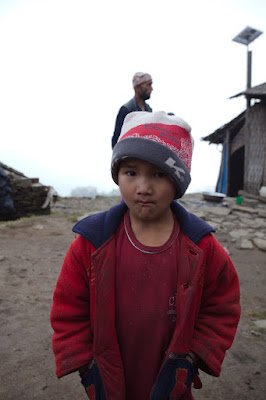 The house where longman had stopped wasn't really setup as a teahouse.

It was just a mother and this boy living there.

The sleeping arrangements would mean that I would take her bed in the kitchen and herself and her child would sleep on the floor elsewhere.

We concluded longman wanted to stay here as he would avoid having to pay for accommodation.

We looked at the other teahouse and decided to move there.

I drank a cup of tea and paid the mother well for the tea. In one way I felt bad that we weren't staying and giving them a needed cash injection but at the same time we just didn't feel we could stay comfortably in this house.

It was dark and damp and Elaine's asthma wasn't impressed.. 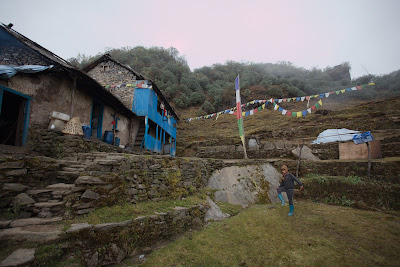 The actual teahouse in Khongma was a much nicer building.

Again it was just a mother and son living there so I no longer felt as bad about not giving a cash injection to the mother and son in the first house. 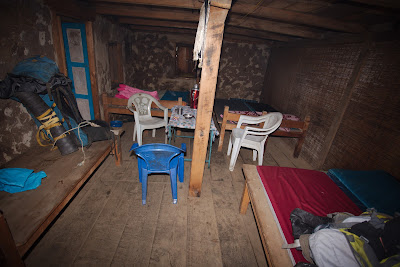 This teahouse had a clean dorm room with 7 beds.

Most of the beds had some form of mattress. 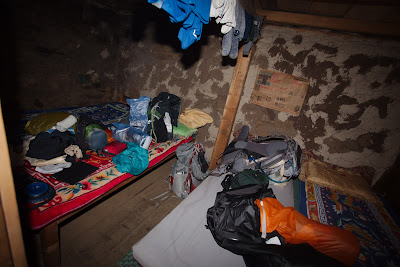 There was also a smaller room with just four beds.

We left our guides in the dorm room and stayed in this private room. 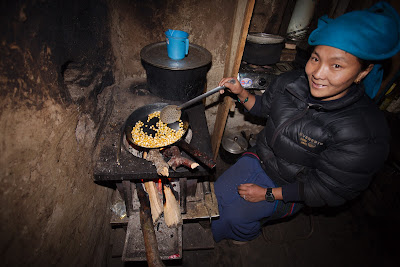 This is Pasang Sherpa who ran the teahouse in Khongma.

When we arrived she made tea and fried corn for us. 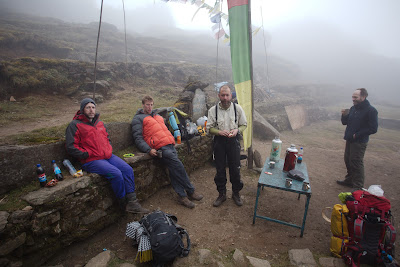 We met this group of Kiwis who had stopped in Khongma for lunch on their way down the hill.

They were trekking without guides.

Originally they tried hiking up the river valley and didn't carry food as they assumed they could buy it along the way.


After a few days with no food they found a local who was willing to bring them back onto the main trekking trail.

First stop they met they bought 2 weeks supply of noodles.That was their primary food for their entire trek. It was good fun winding these guys up.. 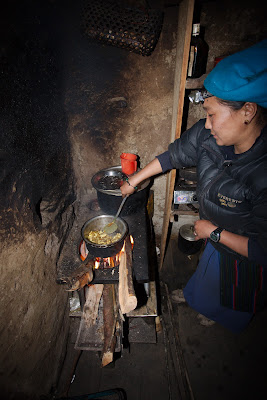 This was our host preparing evening Dal Bhat.

They had a fancy metal stove in the teahouse (made in China).

Although they had a stove they still didn't use a chimney. 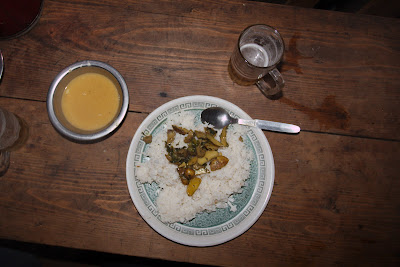 Evening Dal Bhat was tasty and we decided to share a couple of bottles of beer with dinner. 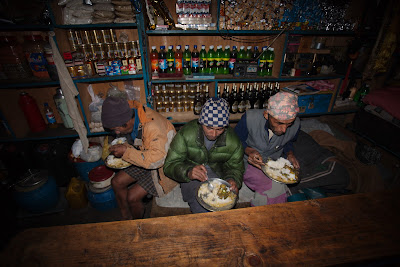 It was a busy night at the teahouse with a number of sherpas staying over.

They weren't guiding foreigners but rather carrying supplies up to teahouses further up the trail. 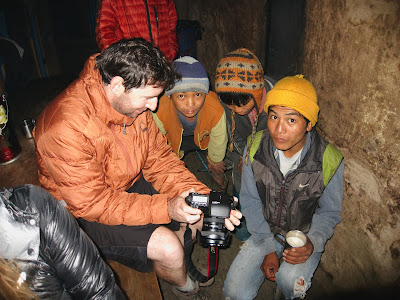 Some of the sherpas carrying loads up the hill were pretty young.

We did take note of the beverages these guys were drinking - the white liquid in this guys cup is Chaang, a local beer.

Since we had gained a lot of altitude during the day and had another big day tomorrow we decided to save tasting for another day. 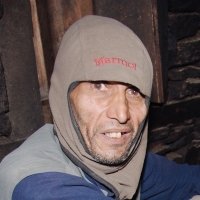 Weather:  Khongma is at about 11,700 ft and was pretty chilly in the evening. I will give Khongma a 2 hat rating.

Accommodation: This was a purpose built teahouse and our host was very friendly. This place certainly earned a 3 cup rating
Posted by Mick Fingleton at 2:00 PM